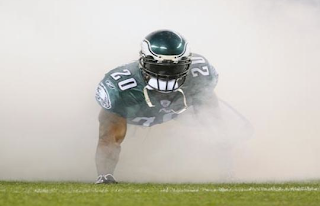 Last night I was lecturing to my graduate students on Italian psychiatrist Roberto Assagioli and his system for personal development called Psychosynthesis. His system rests upon leveraging the power of creative imagination to cultivate, refine and establish a more integrated self. Instead of the self being taken over and controlled by "subpersonalities" this more integrated self can control, regulate and mediate how the various subpersonalities find expression, or not.
After class last night I found myself swimming laps and doing some agility work in the pool when I was visited by a story I had watched years ago on NFL.com. The story was on NFL safety Brian Dawkins and how he prepared for his games. Dawkins played at the highest levels for 16 years while being selected to the pro bowl 9 times. He's considered one of the top safety's to have played the game of football. Needless to say, he's worthy of some our attention and study if you're interested in consistent high level performance.
To cut to the chase, Dawkins undergoes a transformation of sorts as he takes the field. He transforms from his normal self into the Wolverine, modeled after the Marvel comic character, who embodies intensity, fortitude and an unbreakable spirit that, regardless of the situation, brings a warrior spirit to the game.
He even goes to the lengths of having two lockers, one for his normal clothes and conventional persona and a second filled with action figurines, posters, images and other reminders of the characteristics of the Wolverine as he knows it. Above this second locker "Weapon X" is listed instead of his name "Dawkins."
The intersection between our Italian psychiatrist who's famous for challenging Freud's model of psychoanalysis and Brain Dawkins can be found in the creative imaginative faculty of the human being. Dawkins is not a likely future hall of fame athlete because he was playing with imagination and participating with a realm of fantasy. Instead I would venture to guess he was leveraging this powerful human faculty to connect and participate with an energy, consciousness and will that in many ways transcended his everyday self.
Assagioli points to a process called Spiritual Psychosynthesis which is his advanced stage of adult development following the completion of Personal Psychosynthesis. Dawkins was knowingly or unknowingly participating with many of these features. First, Dawkins was making contact with the imagery, symbolism and energy that was in many ways beyond his every day personality. Competition often requires this of us. We cannot be inside our preferences, anxieties, fears and doubts if we are to compete at our highest levels. This contact creates a transformation of sorts.
The transformation Dawkins appeared to participate with was not into a make-believe action hero as our less nuanced understanding of his actions and behavior might suggest. The Wolverine for Dawkins exhibited a few interesting characteristics. First, there was integrity. He would not swear. The Wolverine abided by high standards for his personal conduct. This illustrates greater control, and from my vantage point more integrative maturity.
Secondly, and more importantly this warrior he transformed into game in and game out was also a figure who prayed to himself, his team and even prayed to the football as he crouched down on elbows and knees looking at a single football resting on the field. He even spoke in tongues all as a means of entering into and participating with the energy, consciousness and will of the Wolverine. Dawkins outside of the game of football is a devoted religious man off the field. Again, we see features of the wolverine appearing not to be merely a pretend character but instead a living integration or synthesis of dimensions of himself that are beyond his conventional self. By going beyond himself, he naturally included what was most important off the field.
I find this interesting as perhaps this is what sport is about. Sport is most certainly about conflict, fierce competition and the drive to win. However, inside of these conventional aims we can find how sport can be used to grow and develop athletes. Perhaps sport is a powerful integral practice than can cultivate and refine the many facets of the self. In Dawkin's case perhaps sport elicited a synthesis of personhood and the enlivening dimensions of human experience that stretch beyond conventional personhood.
Interested in watching this video on Dawkins? Check it out here.
Rob McNamara
Author, The Elegant Self & Strength To Awaken

Clarify your goals
Acheive your dreams